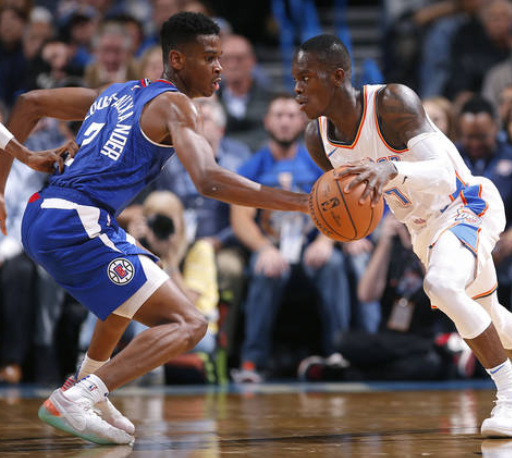 After years of higher level success and at one point being scene as the next big dynasty in the NBA the Oklahoma City Thunder find themselves positioned here. In case you haven’t heard and have been living under a rock this past week has been nothing less than insane, on June 11th the Clippers made it official that they had acquired Paul George from the Thunder. This move simply sent the NBA into chaos as he had just signed an extension to stay with the team long term, but more so this meant that the team was tearing down and with this media view on the team long time star Point Guard Russell Westbrook demanded a trade merely minutes after hearing the news.  Many saw this coming s Westbrook is nearing the latter half of his career and has a variety of things to prove in this league still.

Many including I saw the Miami Heat being the most likely destination for the aging star, mainly because of Pat Riley’s willingness to get what he wants done. I truly saw a package revolving around Justice Winslow and a slew of picks could have enticed the thunder into making this trade, however that is until the Heat met the hard-cap. What this means is that the Miami Heat by NBA restriction could no longer take in anymore salary than they currently have, this was a big issue for the Thunder since the main reason they were looking to trade Westbrook is to get out of the luxury tax, the owner is realizing they won’t compete and he doesn’t want to pay out of his pocket for a bad team. This dilema allowed for the Houston Rockets to sweep in and take advantage of the situation, in a wildly shocking move the Thunder traded Russell Westbrook for Chris Paul.

In total this is what the Thunder received in the three total deals they have made this off season(the other trade being moving on from Jerami Grant to take the luxury tax down):

The is a massive amount of draft capital, not only did they make a move that involved the most picks ever traded in one singular move the Thunder picked up a very young asset in Shai Gilgeous-Alexander. To pair along with that the team also added potential bargaining chips in Chris Paul and Danilo Gallinari, there have already been rumors about Paul being shipped off again, multiple reports stating that the Heat and T-Wolves are still intrigued by a veteran PG.

Chris Paul: Chris Paul is a former star point guard who has had great success in this league in saying that he has a very large contract which could send some teams some very bad feeling towards the idea of adding him to the organization however Paul’s leadership and skill have never been questioned and that is why, The Minnesota Timberwolves send: Andrew Wiggins, and a 2025 unprotected first round pick the the Thunder for Chris Paul. It’s very simple the thunder almost made this move involving a few more pieces and Russell Westbrook instead they get more assets from trading Russell and Paul.

Steven Adams: A valued and reliable big man in Steven Adams is very much so being shipped all the way out of OKC he just has the impact and value to make this team to good for what they are trying to do.  A trade rumor has been circling his name for awhile now and it’s only a matter of time before this becomes true. The Cleveland Caviliers send JR Smith, Jordan Clarkson, and a 2026 unprotected first round pick. Now before anybody says a word about they gains salary actually they don’t, JR Smith probably has one of the weirdest NBA contracts I’ve ever scene is how if he is traded or waived before August first his salary goes down from 15.6 to just 4.5 million dollars, this means that the Thunder could either trade him to a contender or cut him to cut the luxury tax even more plus adding a guy like Jordan Clarkson could bring some scoring off the bench. I more so believe that they would cut JR and let these contracts expire after next season.

Other small moves could be made involving guys like Andre Roberson or Patrick Patterson again to get these contacts off the books and just tank for a season or two.

If these moves are made at best this team wins 30 to 35 games, in those games guys like Shai and Hamidou Diallo prove they can be valuable pieces that can stay around. After the 2020 season and in the offseason leading in te 2021 year the Thunder are set up for a fun time. Not only will they have top pick to target a high level prospect but they will also have more cap space than ever imagined. if no one will be resigned the thunder are looking at around 40 million on their books, which means multiple big name free agents could be primed to send their talents to OKC

Can moves be made yes is their a slight glimmer of hope for the Thunder fans in the world that this out of this world possibility happens yes but that is why we watch as fans we make our predictions and love it when we are right as for this I pray I am right, because I would hate to see an organization that was at one point in time was on top of the world fall so hard on their nose to then be the Brooklyn Nets of the 2020’s.

However the future is very bright in OKC  in fact I would say it is almost as bright as any other team in the league’s and that is if only if the management does what needs to be done. Which I know is possible because Sam Prestie has proven me right before.

Let me know what you think of the Thunders moves, and how the next few years could fair for this organization.