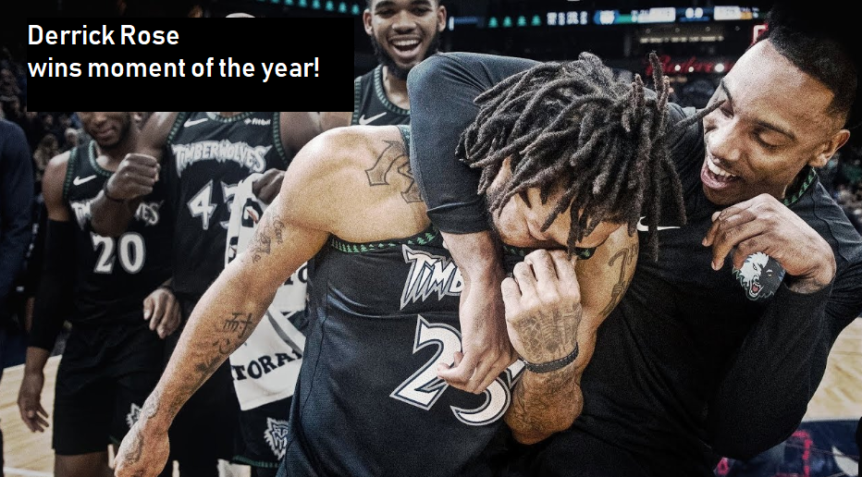 A little over 30 miles east of where I grew up, there was a high school basketball player three grades ahead of me named Derrick Rose. Rose was a quiet kid, but had a relatively bad reputation in that area at that time because of his affiliation with gang culture, and various questions surrounding his background. Rose wore number 25 in memory of a gang member he knew who was tragically murdered in high school. Despite this speculation, many that knew Rose always suggest he is a dedicated father, and a great guy and teammate to be around.

As a high school freshman Rose was the best player in the Chicagoland area, averaging 18.5 PPG, 6.6 Assists, 4.7 Rebounds, and 2.1 Steals per game as a freshman leading his team to a city championship in the freshman/sophomore division, with an outstanding record of 24-1. Rose continued to grow throughout his high school years, with a high school record of  120–12. During his senior year, Rose would explode and average 25.2 PPG, 9.1 Assists, 8.8 Rebounds and an incredible 3.4 Steals per game eventually being named Mr. Illinois Basketball.

After high school, an academic investigation took place and questions arose surrounding Rose’s academic eligibility came to question while at Memphis University. Eventually Rose was cleared, and when he took the floor, he stunned the world as he led Memphis to a #2 national college basketball ranking. But college academics wasn’t for Rose though as he craved the challenge of the pros. Rose’s hometown Chicago Bulls had the first draft pick overall in the NBA draft and to no one’s surprise they took Rose number one overall in 2008. He then led the Chicago Bulls to the playoffs and tied Kareem Abdul Jabbar’s rookie point record for a playoff debut with 36 Pts also adding 11 assists in a victory against the soon to be NBA champion Boston Celtics.

Derrick continued to grow as a player in Chicago under his new mentor and head coach Tom Thibodeau. When Thibodeau arrived, the team would stress defense, and team play which would help Rose become the youngest NBA MVP at age 22 when he averaged 25 PPG, 7 Assists, and just under 5 rebounds. Rose also led his team to the eastern conference finals where they would lose to Lebron James and the Miami Heat in a five game series. Things all seemed to be looking up for Derrick Rose and the Chicago Bulls team. But during the 2012 season in the middle of a game, disaster struck. As Rose jumped with his left side, his left ACL tore severely. Rose’s injury was devastating to say the least, and it left the Chicago Bulls without their primary offensive superstar. Even worse off, Rose couldn’t return the entire following 2013 season because of his ACL rehabilitation which left his team in shambles.

In the summer of the 2013-14 season, there was much angst and questions surrounding Rose. Some NBA reporters suggested Rose could come back if he wanted to come back, and beginning to question his heart and his toughness. Some outlets suggested he was only into basketball for the money, and he was using his ACL “soreness” as an excuse to not participate. Many analysts even tried to compare his injury to others who were supposedly worse off and had come back sooner, attempting to diminish the significance of his injury. The Chicago Bulls signed 2 time NBA Champion Pau Gasol and were ready to win an NBA Championship this year, with all eyes on Derrick Rose from Simeon Career Academy in downtown Chicago the question had to be asked on a daily basis, would he lead them to a championship, or would he fail? Rose came back mentally determined to succeed despite his major physical reservations on his beaten up left knee. Sadly, 10 games into the 2014 season, tragedy struck again. As Rose went to reach for a ball that was about to be intercepted by the Blazers, Rose felt something, not in his ACL torn left knee, but in his right knee. He limped and shook his leg to loosen it, but no use. Rose had to leave the game and tests showed that Rose had torn the meniscus in his other knee.

Without the maximum use of either of his knees, Rose didn’t’ quit on his teammates or the city that loved him enough to draft him number 1 overall in 2008. He rehabbed and worked his butt off to play in the 2015 season but he was very physically limited. His averages plummeted to just 17 PPG, and his minutes had become reduced as he suffered for many more injuries in this time. His various injuries included multiple ankle sprains, an orbital bone break in his eye, a strained hamstring, various wrist problems and knee soreness on a regular basis. Rose simply was not the same player for the Chicago Bulls, and Rose was devastated to find out Chicago Bulls organization would give up on him, and trade him to New York.

In New York City, the big apple, the Knicks were struggling to find chemistry or win any games. They had signed Carmelo Anthony to a max contract extension, and gave 11 time champion Phil Jackson the president of basketball operations position, a position he used to acquire Derrick Rose and eventually Joakim Noah from Chicago. Despite Rose having somewhat of a smaller comeback season, the media had already counted him out. Despite playing 66 games for the Knicks, Rose became the butt of a joke every time he needed a game off to rehab his body. 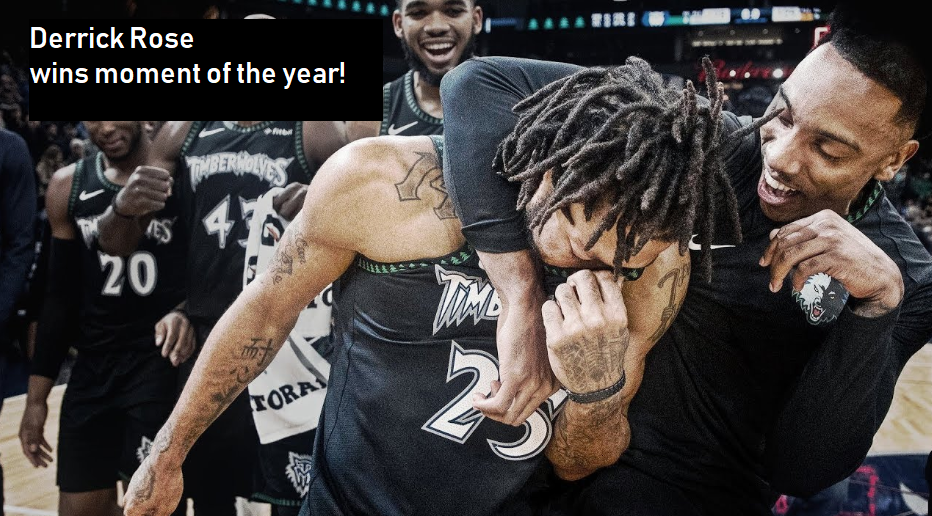 Derrick Rose was not a star anymore. 5 years removed from his MVP season, many viewed him as just a bench player, maybe someone who can give you a bit of offense off of the bench. The game had also changed with Steph Curry’s evolution of the 3 point shot. Rose was not a 3 point shooter, he never had been. The Knicks organization would move on from Rose as they could not reach a contract. Rose decided if he was going to be a bench player he’d go to a winning organization, so he joined his long time rival Lebron James in Cleveland.

To his dismay, the Cavaliers seemed to have no interest in getting Rose any minutes, and once Rose got injured again for the Cavaliers, he was cleared to play and quickly traded to the Utah Jazz in a 3 team trade. The Jazz didn’t actually want Derrick Rose either, they just needed his salary as a dump contract to get the players they needed. Derrick Rose was teamless and out of the league with a season game average of 9.8 pts a game and a label of being injury prone.

Late in that same season Rose’s luck turned around when in March of 2018, an old friend called. Coach Tom Thibodeau had recently been let go by the Chicago Bulls, and was hired as President of Basketball Operations and Head Coach for the Minnesota Timberwolves. Coach Thibodeau offered Rose a contract, and a chance once more to prove he can still play basketball in the world’s most elite Basketball league. Rose simply wouldn’t let this chance go. Rose took the off season very seriously, focusing on his floor general point guard abilities, his passing, and his 3 point shooting.

In the 2018-2019 Season, the Minnesota Timberwolves had a huge distraction that was eating up all of the media press surrounding the team. Perennial NBA All Star Jimmy Butler had a big issue with the younger players Andrew Wiggins and Karl Anthony-Towns. He started fights and locker room issues, and ultimately he would ask for a trade. Shortly after Jimmy’s blow up on the team, the team decided to bench Jimmy, in hopes for a trade offer from various teams.

Halloween night, Derrick Rose was given his first opportunity to start for the team. Rose decided he would put the world on notice, he was back. Rose’s defense was probably his best attribute in the game, he locked down everyone he was switched on. He was no longer just an offense scorer, he was a complete basketball player and he wanted everyone to know. Rose couldn’t miss, scoring 50 points, a career high, shooting 57% from 3, and blocking a potential game tying basket.

The world was stunned. All of Derrick Rose’s critiques who mocked him, and used him as a primary example of injuries and ailments. People who said that he’d ever return to his former self, and the General Managers in Utah, New York, Cleveland, and Chicago, that traded, cut, waived him or didn’t offer a contract. The entire NBA world exploded, as NBA Twitter blew up with praise for the 30 year old Guard who was beaten down physically, counted out, and dismissed.

As Rose made his game securing block, the Minnesota crowd erupted. Fans started giving Rose a standing ovation, and many had their jaws stuck wide open, others were screaming and cheering his praises. After the victory, Rose was very emotional, and broke into tears on the court as his teammates embraced him and sang his praise. As Rose got interviewed after the game he said among other things that he ‘worked his ass off for this’.

Once a hero of Chicago, exalted and praised, then thrown away as he struggled to maintain his elite physicality. Mocked and traded around by various dysfunctional franchises, waived and dismissed, Rose tasted the bottom of the league. The youngest MVP in the history of basketball, would not let his legacy be that of a ‘has been’.

This year Rose is averaging playing the point guard position instead of the scoring guard, and has more than doubled his 3 point % shooting an incredibly efficient 37% from 3. The NBA awarded Rose with the most memorable moment of the 2019 season last night, rightfully deserved. On Halloween Night 2018, we all witnessed the Unlikely Comeback of Derrick Rose.