The Boston Celtics, a legendary franchise, 17 titles, a city of championship teams.

The New England Patriots just won a Super Bowl with a Quarterback out of the 6th round, and an MVP receiver who not only went in the 7th round, but used to play Quarterback..

Boston, the home of Harvard, has always been the city of hard work, intelligence, efficiency, and not making mistakes.

The Celtics, like the Patriots, and the Red Sox, always won by focusing less on the star, and more on the team. Try to get Tom Brady or Bill Belichick to glamourize themselves or an individual teammate, you simply can’t, they are too team driven.

That brings me to the 2018 NBA Playoffs, Where Brad Stevens, another Boston ”genius” as it were, had the young and injured Celtics team 7 games deep in a tightly contested Eastern Conference Finals.

The probability of this happening should’ve been little to none considering the Celtics traded 2 of their starters to Cleveland the year prior, and Kyrie Irving the asset they traded for had been injured the entire playoff run.

To make matters worse, star free agent Gordon Hayward had a serious injury that kept him out the entire season as well. That left the Celtics with Veteran Al Horford in the post, Marcus Smart at the point backed up Terry Rozier. Rookie Jayson Tatum and second year player Jalen Brown played in the backcourt as well.

How did a rookie in Jayson Tatum, and 2 second year players in Brown and Rozier lead the Celtics through the  playoffs against superstars like Giannis and the Bucks, or Joel Embiid, Ben Simmons and the 76ers seemingly with ease?

How did a 3rd string point guard point guard put up 20+ points in multiple playoff games and get the nickname ”scary terry”. 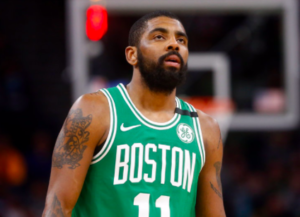 How did Jalen Brown and Jayson Tatum, fresh, young NBA Players carry the load for this injured Celtics team to take an NBA Legend like Lebron James to 7 games?

Lebron James would inevitably win game 7 and would lose in the 2018 NBA finals to Steph Curry’s Golden State Warriors.

Kyrie Irving and Gordon Hayward would rehab in the off season and come back to the Celtics during camp.

This 2019 Regular Season has been a very up and down one for the Celtics, and the issues are painfully obvious to anyone watching.

Hayward seems to be making a comeback slowly and working to assimilate. But Kyrie Irving has been surrounded with drama all year.

In the summer of 2018 after Irving was done rehabbing, Irving told a packed Boston Garden that he would resign with the team following the 2019 season, but since then, the Celtics have struggled. Kyrie Irving’s game is one that is a true spectacle to watch. The man can truly handle the basketball in ways that most couldn’t dream of. Irving is impossible to guard, but he’s toxic.

Now, after a 5 game second round exit by a Kyrie Irving led team. During a playoff run, that had Terry Rozier and others reevaluating if he even wants to stay in Boston. He told First Take’s Stephen A Smith he would “take a trip” for free agency.

Irving proved he can’t be the face of the Boston Celtics, he ruined the core of that back court, and we are left to evaluate the true reason the Boston Celtics got to the Eastern Conference Finals. Then in that series took Lebron James and the Cavaliers 7 Games on the backs of young players, one game from a title series, is because they played Boston Basketball. They ran Brad Stephens’ game-plan, they were disciplined, they made the extra pass, they didn’t make mistakes and they didn’t focus on one player.

Kyrie Irving can’t help but focus on himself. Irving will take plays where he will dribble 25 times, maybe make one pass, demand the ball back, and shoot a mid range jumper. You may say ”oh well he does that to close the game”, and I would respond ”No, he does it 4-5 times a game, sometimes in key moments”. I can also guarantee that Brad Stephens does not approve of these methods.

Irving suffered a right knee sprain, Irving is prone to knee problems and has been for a few years now.

Irving also has an attitude problem and is relatively condescending. Why do I say this?

While voluntarily talking to the media, outside of required press time, Irving suggested to reporters that he had to call his former teammate Lebron James to apologize. His apology was for ”being immature” because he is having to deal with that now.

This, coming from a guy who can’t stay on the floor, and when he’s off the floor, the team does not slow down, and one could argue the offense is more fluid. Statistically speaking, Irving puts up great numbers, better than anyone on his team.

I think Danny Ainge build a contender through the draft and he doesn’t even realize it. We keep hearing ’Celtics could get Anthony Davis’ or ’Celtics could trade Jalen Brown and Tatum’ so much so that there is rumors that young rising Star Jayson Tatum said he would welcome a trade. Doesn’t sound like he even wants to play with Kyrie Irving and who could blame him?

He went deep in the playoffs without Irving, and all Irving does is take the ball out of his hands.