FS1’s Nick Wright wrote a list of the top 7 most valuable assets in the NBA in 2019.

One of the most amazing things, and rare things about Luka Dončić’s game is his ability to take over the game. The ability to flip a switch in ones brain and score points in clutch moments. Kobe has his Mamba Mentality Dončić has “Luka Magic”.

“The Wonderboy” as his Slovenian fans labeled Dončić is unique from any other basketball player we’ve ever seen, as he is already a star and a professional champion before he entered the league.

Luka at the age of 14 was facing professional level competition and learned even back then how to dominate the game.

Luka sometimes air balls early on, he can make his coach and team nervous.

But when the Mavericks need points, Lukas focus changes, his eyes become fixated and obsessed. All of the juvenile sloppy play that could be perceived as tunnel vision in the youths game turns into sharp, clutch, efficiency.

In clutch FG situations, Luka is only behind Victor Oladipo at 57.1% FG % in the clutch. This kid is simply cold blooded, more so than almost anyone in the league.

Dončić is already one of the most amazing late game scorers in the league and his facilitating gets better by the day. Luka is far ahead of his age being able to play off the ball as a key shooter, but demanding the ball in key moments to make important plays. Dončić gets frustrated when the ball isn’t trusted in his hands in those moments and is seen barking at his teammates.

At the age of 19 this is simply unprecedented.

Even Lebron James who came into the league with his head on fire, did not demand the ball in pivotal moments as angrily and begrudgingly as Dončić does. He feels it is simply his role to take the game over, and we haven’t seen that out of any player his age.

His ferocity can only be compared to athletes like Tiger Woods, Michael Jordan, his one time mentor Kobe Bryant, and Wayne Gretzky. Dončić’s youthful ability to flip a switch and take over a game is still in its infancy.

What are we watching? 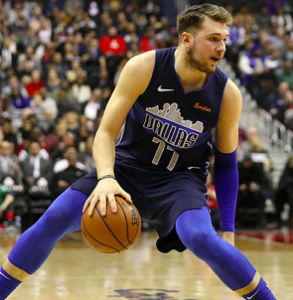 Are we seeing something different than we’ve ever seen? A player with developing long ranged skills that space the floor similar to Steph Curry.

A mentality to take over a game late, hindered only by inexperience and trying to make too many plays.

Some things come naturally to people and what we are seeing from Mavericks Rookie is unprecedented. Will Luka Dončić become one of the greatest basketballl players of all time? Or are we seeing as much as we are going to see out of this youthful phenom?

Will he take the Mavericks from a lottery team to a playoff team in one year?

Dueling players like James Harden, Paul George, Lebron James, Curry, and Lillard is giving Dončić the type of confidence that can change a sport, and he has the ability to be a generational player. The idea that Dončić is done improving just doesn’t seem like it’s realistic to me.

The Mavericks have moved players that took the ball out of Luka’s hands. Trading Dennis Smith Jr to the Knicks, and Harrison Barnes to the Kings. The Mavericks have also traded for Kristaps Porzingis, another Euro League SuperStar.

Together they may win many games, but will they win a title? If Luka is as good as he seems, why couldn’t they win a few?

The new look Mavericks are developing their young star, and next year they may be a real force to be reckoned with.

With teams like the Warriors aging slowly, and Rockets being sort of one dimensional this season. The Celtics seem to be relatively dysfunctional, who knows about the 76ers, Raptors, or Lakers.

Luka Dončić, Kristaps Porzingis, and the Dallas Mavericks may be the team to watch going forward sooner than we think.