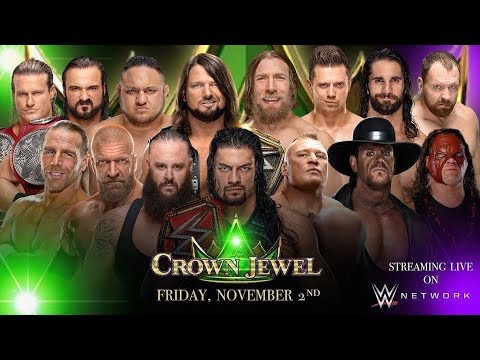 The endless controversy surrounding WWE Crown Jewel may continue, but at least after Friday afternoon the show is now officially over. The four-hour event from King Saud Stadium in Riyadh, Saudi Arabia, featured a new universal champion being crowned, a superstar being named the “best int he world” at the end of the World Cup tournament and a nostalgic main event between DeGeneration X and the Brothers of Destruction.
WWE properly decided to neither mention “Saudi Arabia” nor air any of the propaganda videos that further tarnished an already questionable Greatest Royal Rumble show back in April. Still, something felt off about Crown Jewel considering many of the company’s best superstars were not on the show — and certainly not in the World Cup tournament. The booking will certainly leave WWE fans questioning the company’s plans going forward, but whether that is worthwhile as a result of the event is worthy of argument.
Overall, there were a couple notable moments, and all the match reviews below are graded on a curve considering the expectation for an event like this. Certainly if they were to have been held at a normal WWE pay-per-view, the grades would be a bit lower. Same goes for the show itself, which failed as a normal event but at least had enough to talk about afterward.

HELP US GET TO 1000 SUBS ON OUR CHANNEL SO PLEASE SUBSCRIBE TO THE SPOTLIGHT SPORTS TALK https://www.youtube.com/channel/UCQ-G…